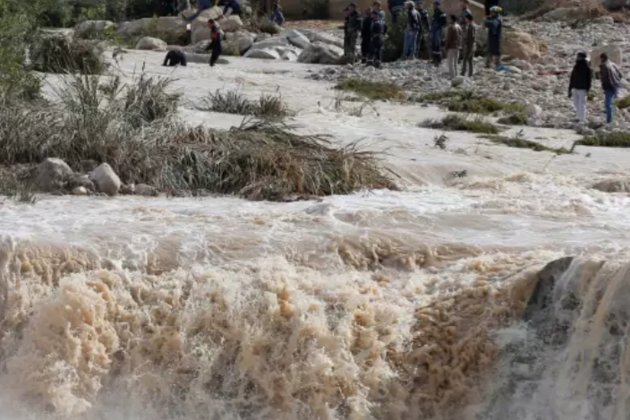 AMMAN, Jordan - Flash floods triggered by heavy rains in parts of Jordan have led to the death of 12 people.

On Saturday morning, government authorities said that floodwaters in some parts of the southern mountainous city of Petra rose up to 4m (13ft), following which rescue team had been deployed.

Government spokeswoman Jumana Ghunaimat said that nearly 4,000 tourists had been evacuated from the ancient city and taken to safe areas.

Authorities also said that a state of emergency had been declared in the port city of Aqaba and that all tourist trips had been cancelled amid a threat of floods after heavy downpours.

In Madaba province - which is located southwest of the capital Amman - rescue teams and helicopters launched a search operation for five people after local teams confirmed that a car was swept away in the torrential rain and floods.

Earlier on Friday, officials confirmed that two women and a girl were killed in the province, while nine people suffered injuries and were rushed to local hospitals.

Meanwhile, civil defence authorities confirmed late on Friday that a child was confirmed to have died in south Amman's Dabaa region.

Further, one of the main roads that connects Amman to the south of the country was cut off due to the floods.

On Saturday, authorities were urging residents in affected areas to evacuate their homes as more heavy rains were expected through the day.

Further, hundreds of families that had been living in makeshift tens in outlying rural and desert areas and scattered settlements in villages were evacuated.

The country is being ravaged by heavy rains and floods merely two weeks after similar conditions led to the death of 21 people, who drowned in a flash flood in the Dead Sea.

In the incident last month, 18 of the 21 killed were children on a school trip, which led to a public outcry.

The tragic drowning and the growing public anger led to the resignation of the country's education and tourism ministers.