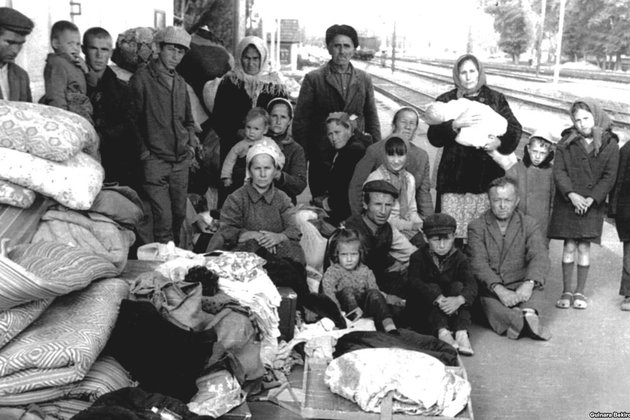 Crimean History Book To Be Yanked After 'Nazi' Outcry

A new Crimean history textbook will be withdrawn after harsh criticism by human rights activists and Crimean Tatars, who said the book incites ethnic hatred by giving false information on an alleged collaboration between the indigenous, mostly Muslim, Turkic-speaking ethnic group and the Nazis as well as on their deportation to Central Asia in 1944.

Ruslan Balbek, a member of the Russian parliaments lower chamber, the State Duma, told the RIA Novosti news agency on February 18 that the copies of the 10th-grade history textbook will be withdrawn from libraries and bookshops across the Russia-annexed Ukrainian Black Sea peninsula.

Balbek said earlier that the textbook contained erroneous allegations of mass collaboration between the Crimean Tatars and the Nazi occupiers during World War II.

The Kremlin-controlled Council of the Crimean Tatars had condemned the textbook earlier, saying it tries to justify the ethnic group's mass deportation by the Soviets.

The textbook was scheduled to be added to the curriculum in Crimea as of September.

Iryna Sedova, a historian with the group, said the textbook 'must be immediately withdrawn from schools in Crimea for promoting hate speech.'

Valentyna Potapova, the head of the Almenda Civil Education Center in Crimea, issued a statement calling for the immediate withdrawal of the textbook from schools because 'it will sow discord among Crimea's residents.'

The self-governing body of the Crimean Tatars, which was branded as extremist and banned in Russia in 2016, also condemned the textbook, saying its content carries elements of extremism.

The textbook says that when Crimean Tatars were deported to Central Asia they were provided with decent food, housing, financial support, and land to construct homes, which human rights activists and historians say it is not true.

The Crimean Tatars were deported en masse from their native Crimea in May 1944, after Soviet dictator Josef Stalin accused them of collaborating with Nazi Germany.

Starting on May 18, 1944, some 250,000 people were put on trains and sent to Central Asia. Tens of thousands died during the journey or after they were left on the barren steppe with few resources.

Crimean Tatars were not allowed to return to Crimea until the late 1980s, when Mikhail Gorbachev implemented reforms in the years before the disintegration of the Soviet Union.

In November 2015, the Ukrainian parliament passed a law declaring May 18 the Day of Commemoration of Victims of the Genocide of the Crimean Tatars.

After Russia seized Crimea, Russian President Vladimir Putin promised the Crimean Tatars that they would be treated well and guaranteed equal rights.

But Crimean Tatars, rights activists, and Western governments say Russia has subjected Crimean Tatars and others who opposed the annexation to abuse, discrimination, and politically motivated prosecution on false charges.

With reporting by the Crimean Desk of RFE/RL's Ukrainian Service, RIA Novosti and Kommersant