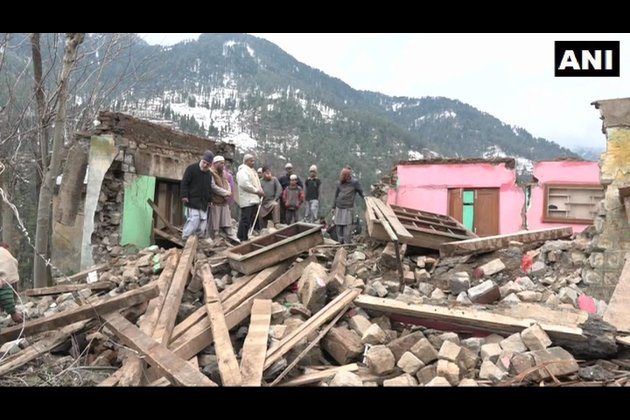 Udhampur (Jammu and Kashmir) [India], Feb 20 (ANI): Incessant rain and snowfall over the past one month have destroyed as many as nine houses in Jakhed panchayat area near Dudu in Jammu and Kashmir's Udhampur district.

Families of people whose houses were destroyed and forced to seek shelter in nearby areas are now demanding assistance from the administration.

Ghulam Hasan, whose house has been destroyed, told ANI, "Due to continuous snowfall and rainfall since last week a landslide occurred and our houses have been completely destroyed. Nine families have been affected by this and we are taking shelter in nearby areas. We want to plead to higher authorities to provide us relief."

Around 2500 hectares of land has also borne the brunt of the landslide.

District Administration has taken cognizance of the event and Deputy Commissioner Ravinder Kumar has assured of speedy assistance to the adversely affected families.

"Because of snowfall and rainfall many areas have been adversely affected. We will provide immediate relief to affected families. It has been brought to our notice that nine houses have been damaged. Electricity supply is affected; PHC pipelines and roads are also damaged. The continuous spell has

done much harm. We are assessing the situation."

Heavy snowfall and rain had thrown daily life out of gear in many areas of the valley. On January 31, fresh snowfall and landslides had forced the

Jammu-Srinagar highway, which is the only road link of the state to the rest of the country, to close for traffic. (ANI)