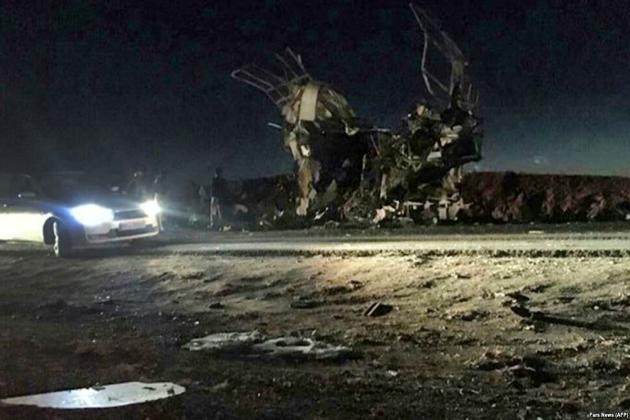 'The suicide bomber was named Hafez Mohammad-Ali and was from Pakistan,' Brigadier General Mohammad Pakpour of Iran's Islamic Revolutionary Guards Corps (IRGC) said on February 19, according to the force's Sepah news agency.

The head of the IRGCs ground forces also said that another alleged member of the militant cell that planned the February 13 attack was also Pakistani.

Three Iranians from Sistan-Baluchistan Province in southeast Iran were also part of the cell and two of them have been arrested, according to Pakpour.

The guards on February 18 announced three arrests in the case.

Islamabad has condemned the attack in which 27 IRGC members were killed, one of the deadliest on Iranian security forces in years, and vowed to cooperate.

'We will cooperate fully with Iran, we have operational contact with Iran,' Qureshi told state-run television.

In the attack, a suicide bomber drove an explosives-laden vehicle into a bus that was transporting IRGC troops in Sistan-Baluchistan Province -- a volatile area near Iran's borders with Pakistan and Afghanistan where militant groups and drug smugglers frequently operate.

The province is populated mainly by Sunni Muslim ethnic Baluchis.

Iran has repeatedly said that militant groups operate from safe havens in Pakistan and called on the neighboring country to crack down on them.

With reporting by AP and AFP