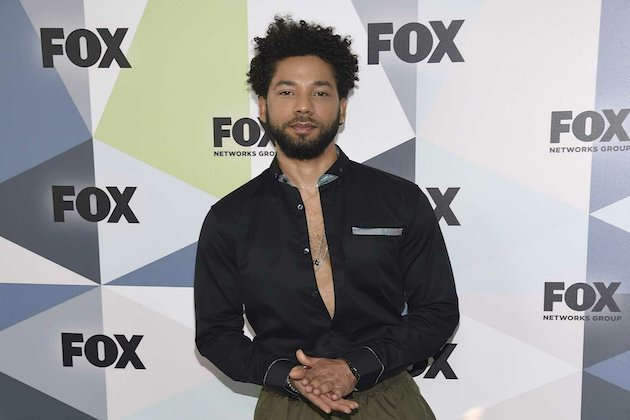 CHICAGO, Illinois - U.S. actor Jussie Smollett was granted bail on Thursday after appearing in a Chicago court charged with filing a false report. He did not enter a plea.

As of late Thursday his employer, 20th Century Fox Television and Fox Entertainment, was standing by their man.

Smollett is accused of staging an attack on himself, which was extensively portrayed in the media as a 'hate crime.'

On Thursday he was ordered to a pay a $100,000 bond and was required to surrender his passport.

He was accompanied in court by family members.

Chicago police announced the charges Wednesday night and Smollett turned himself in around 5:00am Thursday.

The openly-gay actor, who is black, and who stars in 20th Century Fox's TV drama 'Empire' made headlines around the world last month when he told police on 29 January that he had been attacked by two men who appeared to be supporters of Donald Trump's 'Make America Great again.'

All of this police say was orchestrated by Smollett. There was even a rehearsal at the place where the attack was to be staged.

At the time of the 'attack' the actor was overwhelmed with support from celebrities and politicans who denounced 'the attack.'

Police however were skeptical from the start, saying there were inconsistencies in the actor's story.

An investigation over the past 3 weeks, which included the examination of footage obtained from surveillance cameras where the alleged attack took place, has resulted in the actor being charged.

Police allege two brothers who had previously worked as extras on 'Empire' were paid $3,500 by Smollett to stage the attack. Soon after the incident the brothers flew to Nigeria. On their arrival back they were met by police at Customs. Under questioning they admitted to staging the attack on  behalf of Smollett. They are co-operating with police, who say the bothers will not be charged.

A police press conference on Thursday indicated officers were 'ticked off' over the incident which took up valuable police resources that coiuld have been applied to other investigations.

"Why would anyone, especially an African-American man, use the symbolism of a noose to make false accusations? How could someone look at the hate and suffering associated with that symbol and see an opportunity to manipulate that symbol to further his own profile? How can an individual who's been embraced by the city of Chicago, turn around and slap everyone in this city in the face by making these false claims?" Chicago police Superintendent Eddie Johnson, himself an Africa-American, asked.

It is understood Smollett's motivation was because he was unhappy with his salary and he saw it as an opportunity to lift his profile.

20th Century Fox has been unmovedf by the publicity surrounding their star. "Jussie Smollett continues to be a consummate professional on set and as we have previously stated, he is not being written out of the show," the network said in a statement on Tuesday.

Following the arrest and formal charging of the star on Thursday, the network released a further statement.

"We understand the seriousness of this matter and we respect the legal process. We are evaluating the situation and we are considering our options," the statement said.

Smollett's lawyers meantime mounted a solid defense of their client, describing the laying of charges and the press conference as a police spectacular.

"The presumption of innocence, a bedrock in the search for justice, was trampled upon at the expense of Mr Smollett and notably, on the eve of a mayoral election," a statement form them released on Thursday said.

"Mr Smollett is a young man of impeccable character and integrity who fiercely and solemnly maintains his innocence and feels betrayed by a system that apparently wants to skip due process and proceed directly to sentencing."