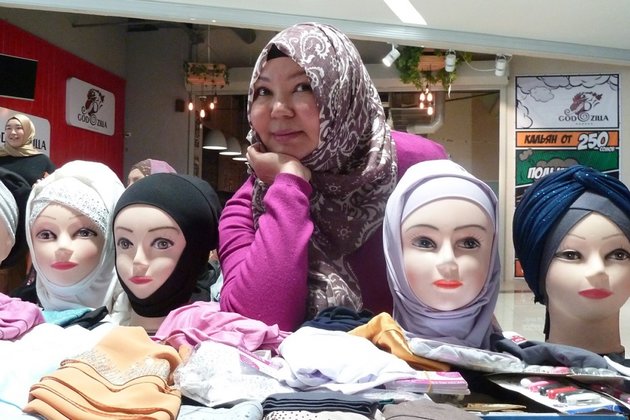 Kyrgyzstan: Fighting prejudice one hijab at a time

There is nothing like wearing a hijab in Kyrgyzstan to split a crowd.

For the fourth year in a row, Islam-themed monthly magazine Umma has organized festivities in Bishkek and Osh, the countrys two largest cities, to mark World Hijab Day. The holiday was dreamt up by New York-based activist Nazma Khan and has been marked every February 1 since 2013 with the stated goal of fostering tolerance.

In a country like Kyrgyzstan, where secular conservatives, growing numbers of observant Muslims and a ghetto of Western-leaning liberals routinely engage in ideological pitched battles of words, casually adopting this simple item of dress generates more heat than understanding.

The annual hijab day event had a slow start in Kyrgyzstan. Around 150 women turned up to attend the first time in Bishkek. This year proved more successful and drew closer to 2,000 people.

At the venue, a shopping center, organizers gave talks on the history of the hijab and offered masterclasses on how best to wear it and tie knots. Activists were bestowed with awards in recognition of their public work promoting womens rights and designers displayed the latest trends in Islam-appropriate clothing at a fashion catwalk. Visitors also took part in quizzes and other games, for which prizes were handed out.

Umma chief editor Elianna Maryam Satarova said her goal was to help dispel a commonplace association between the hijab and religious radicalism. Kyrgyz women who choose to don the headscarf get abuse and ridicule from people on the street on a regular basis, Satarova said.

In order to play down the religious connotation of the event, the name was subtly changed to Day of the Headscarf and the date was moved forward to February 2, a Saturday, so that more people might attend.

This has given the festivity a broader appeal, Satarova argued: On this holiday you see a lot of women inelechek, the traditional headdress of Kyrgyz women.

It has also helped to have the endorsement of some respected public figures. This year, member of parliament Ainuru Altybayeva, seasoned rights advocate Rita Karasartova, and television presenter and self-styled fashion guruAssol Moldokmatovawere among the guests at the Bishkek event.

Satarova said that the intent is not to promote the adoption of the headscarf, but rather to demonstrate that it poses no danger to the public.

There are still stereotypical, negative attitudes toward women and girls wearing the hijab. If earlier these women faced aggression, now they are ignored, as if they do not exist. It is often because of the hijab that women are not hired or even allowed into swimming pools, she said.

Traditionally, it is married women in Kyrgyzstan who adopt the headscarf. Karasartova, the rights activist, explained how she had one planted on her head the day of her wedding.

I dont wear a headscarf all the time, but like all Kyrgyzkelin[daughters-in-law], I wear one when I am going to the village to visit my husband's relatives, she said.

Adopting the hijab may arguably be as much a fashion statement as one about faith. At the very least, asserting ones religious identity is no excuse for dispensing with glamor. Chinara Mamadzhakypova, who founded her own design studio, this year presented a collection of hats fashioned out of scarves.

I have been actively incorporating elements of Islamic fashion into my collection and I often give away headscarves to women who buy my clothes. A woman in a scarf looks very gentle and distinguished, Mamadzhakypova said.

Asel Amatova, also a designer, has been wearing the hijab for just over a year. At the Bishkek event, she showcased wedding and evening dresses she had styled.

I started to produce this line of clothes as soon as I put on the hijab myself, Amatova said.

That embrace of the hijab was not without its difficulty, however.

Even though my parents are also Muslims, they were not enthusiastic about this change in their lives. But while my relatives were understanding [] I often got aggression from strangers. One day, an elderly grandmother shouted at me, saying: Here comes the black hag! Amatova said.

A recurrent motif heard from champions of the hijab at the Bishkek celebrations was how it transforms its wearer.

After I put on the hijab, I became kinder, softer, more tolerant. My behavior in public has changed for the better, Amatova said.

There was a smattering of very young girls at the hijab event. Zhipara, the mother of 11-year-old Rakhima, herself began donning the hijab 14 years ago. Having her daughter do the same seemed natural.

From when she was three years old, I would occasionally put the hijab on my daughter and she liked it. She began to wear it for real about two years ago, and now she wears it all the time, Zhipara said.

To Zhiparas relief, other children in her class appear to be accepting of Rakhima and her clothes.

Curious and inspired, this Eurasianet correspondent turned to Venus Akelenova, owner of a beauty salon that caters to Muslim women, for help picking outa suitable scarf. The transformation was radical. The sense was that the hijab bestowed not just femininity but also a sense of security.

As if to illustrate that the hijab has reached a near-critical point of popular acceptance, it drew little attention from passersby in restaurants or on the street. It was a different story on social media, however, as many people reacted angrily to a photo of this correspondent in a hijab posted to Facebook.

What are you doing? Propagandizing the hijab? wrote one.

Are you going to Syria? asked another.

Take off that scarf right now. It does not suit you. You look like an old granny, opined a third.

The negativity was shocking. Although there were plentiful supportive comments, the more poisonous ones received lots of endorsements.

The takeaway has been that it may become necessary just to make a point to make wearing the hijab an annual tradition until everybody gets that it is not for them to decide how people should live.