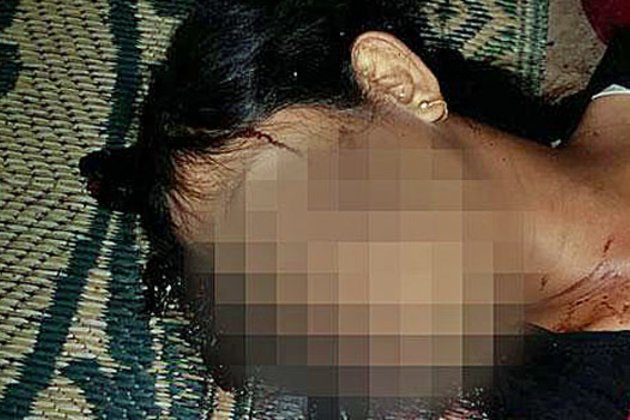 Ye Ye Soe, 18, tried to run for cover along with her family members when the shooting began, but was hit in the face by gunfire from government forces, they said, adding that the Myanmar Army used helicopters during the fighting.

During the armed conflict near the village, residents said that government troops fired guns and other artillery into the community and afterwards ordered them to gather inside a local school and a monastery for an inspection.

Villagers later told RFA's Myanmar Service that there was no fighting in Min Bu village, but Myanmar Army soldiers responded to a land mine explosion by firing into the village.

"Government soldiers opened fired every direction as they were deployed all around the village," Min Bu Village head Saw Hla Tun told RFA.

The villagers were able to return to the scene of the shooting until about 3 p.m. local time to check Ye Ye Soes body.

One villager, who declined to give his name, told RFA that when the residents reported the girls death to the military commander of the battalion conducting the inspection, officials rejected that she had been killed by their gunfire.

Arakan Army (AA) spokesperson Khine Thukha confirmed the exchange of gunfire between its troops and government soldiers between Min Bu and Naw Wai villages in northern Rakhine State, which it said resulted in the deaths of more than 20 Myanmar Army fighters.

Ye Ye Soes death is the second reported civilian fatality, following that of seven-year-old boy Naing Soe, who suffered a shrapnel wound to the head after an attack on his village by government troops in late January and died two days later.

'Civilians must never be targeted'

Yanghee Lee, the United Nations special rapporteur on the situation of human rights in Myanmar, retweeted photos of the dead woman and wrote, Civilians must never be targeted! Heartfelt sorrow for the families of the victims.

Lee has been a vocal critic of the fighting in Rakhine state, urging both sides to take precautions to ensure the safety of civilians, thousands of whom have been driven from their homes by the hostilities since late last November.

Clashes between the Myanmar Army and the AA intensified early this year after Arakan fighters carried out coordinated attacks on four police outposts near Myanmars border with Bangladesh, killing 13 policemen and injuring nine others.

In response, the government military deployed a large number of troops to the region with villagers and others reporting the use of heavy weapons, artillery, and helicopters in civilian areas.

The military and state government has also block humanitarian aid from reaching civilians affected by the armed conflict.

In January, Rakhine state government instructed United Nations and international humanitarian agencies other than the World Food Programme and the International Committee of the Red Cross, to suspend their activities in Ponnagyun, Kyauktaw, Rathedaung, Buthidaung, and Maungdaw townships the five areas in northern Rakhine where fighting has occurred.