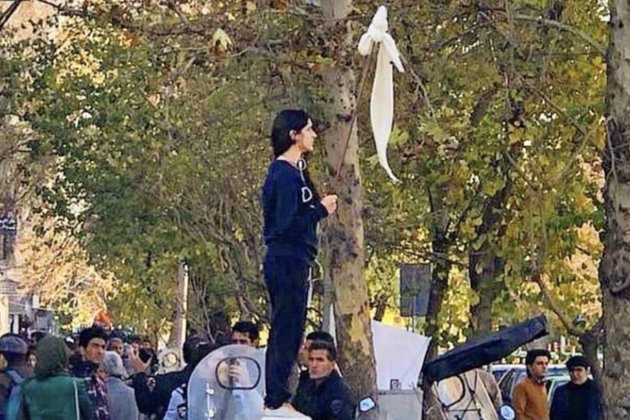 Hijabs & Harassment: How Iran Soured Its 'Sisters' On The Revolution

Forty years ago, Iranian women and girls of various political and social stripes helped to bring on Iran's 1979 revolution to topple the shah.

But according to some of those disillusioned by decades of gender discrimination under the leadership of the ensuing 'Islamic republic,' many of those same women quickly fell victim to the religiously dominated hierarchy that replaced the monarchy.

Twenty-four-year-old leftist student Chahla Chafiq was one of millions of Iranians protesting in the streets against what they regarded as the brutal and severe rule of Mohammad Reza Shah Pahlavi.

Chafiq, now a Paris-based sociologist and author, says she had joined the revolutionary movement hoping for a 'better Iran' but instead she and 38 million other Iranians got a 'winter of repression' that sent her into exile just three years later.

She recalls the joy and excitement giving way to shock and frustration once Ayatollah Ruhollah Khomeini and the clerical elite signaled that women would be sidelined and stripped of many of their rights.

Chafiq calls it 'an intellectual earthquake.'

She remembers that amid the tumult, groups of male co-revolutionaries would brashly push men and women into separate columns of demonstrators and tell women to cover their hair with scarves.

'They would address us as 'sisters,'' Chafiq says. 'It was a new term for me.'

But the label would stick among conservatives and state officials, who routinely addressed women as 'sister' or 'mother' to emphasize traditional roles and devoid them of any sexuality.

''What's wrong with it?'' she remembers men saying of the conspicuously religious head scarf for women that the shah's father had banned nearly half a century earlier, elevating its political significance.

So just as the Islamic head scarf, known as the hijab, had become a powerful symbol of opposition to the Pahlavi dynasty, women were being made convenient pawns in the broader political effort to denounce the brutality, perceived inequities, and even the modernization of the past half-century.

'Catastrophe' In The Making

It didn't take long for Khomeini, who had himself accused the shah of reversing gains for women, to impose a strict dress code to 'save' women from 'becoming this plaything that they want to turn you into.'

'There should be no sin within Islamic ministries. Naked women should not come to Islamic ministries. Women can go [to ministries] with the hijab,' the daily Kayhan quoted Khomeini as saying on March 7, 1979. 'There's no problem for them to go to work, but they need to have the Islamic hijab.'

The announcement came as a shock to many women, including Chafiq, who calls it the beginning of an era of repression against women.

'I remember it was very surprising for me, even the term he used -- he said women should not go to work at ministries 'naked.' It was absurd and laughable. At the same time, it was the announcement of a catastrophe,' she says.

The very next day, on International Women's Day, thousands of women and men poured into the streets to protest (see tweet below). Their chants inveighed against the chador -- the full-length covering that leaves only the hands, face, and feet exposed -- and challenged 'dictatorship' and the notions of 'should and should not in freedom.'

They were met with violence from conservatives who accused them of being tools of the shah's hated secret service.

One photographer who was documenting the mass protest, Hengameh Golestan, has suggested that people believed that demonstrating might prompt the ascendant authorities to reverse the decision.

'This time they were disappointed,' she said. 'From the next day, everybody had to wear the scarf.'

Women protesting against the compulsory hijab in Tehran in 1979:

Chafiq has vivid memories of the atmosphere of violence and fear that reigned in those postrevolutionary days.

'Committees had been set up where men with Kalashnikovs would stop us in the streets and tell us to put on a scarf. They were kids,' Chafiq says.

She recalls that one of them, 'who was probably 15, around the same age as my little brother, showed me his gun and told me to cover up.'

'Don't talk to me like that,' she says she snapped back, eliciting a terrifying stare from the youth.

'I saw hate in the eyes of that kid. I trembled with fear and thought to myself, 'We're not realizing the depth of the catastrophe that is taking place.''

At least some of the religiously inclined women who helped spark the revolution were also disturbed by the erosion of independence for women.

Mahboubeh Abbasgholizadeh, a former theology student and campaigner for women's participation in Islamic society before multiple arrests sent her into exile, was a 17-year-old who wore a head scarf at the time to show her dedication to the revolutionary cause.

From a traditional religious family, she says that while the revolution gave women like her self-confidence, the clerical leadership stole their freedom and made them 'second-class citizens.'

'We used to be in the streets day and night, without asking anyone for permission,' she says. 'But right after the revolution, our husbands started to say that we have to ask for their permission and that we can't leave the house without their permission, [and] saying we can't be politically active.'

In the aftermath of the revolution and with the creation of an Islamic republic, laws were soon introduced in Iran that favored men in areas like divorce, child custody, and inheritance.

The Islamic establishment banned women from acting as judges and discouraged them from working as lawyers. A woman's testimony in court was assigned just half the value of a man's, and women needed the permission of their father or husband to leave the country.

The hijab was gradually made compulsory, while the chador was promoted as the preferred form of hijab. Women were required to cover their hair and body, and dark colors became the norm. In 1983, a law was passed stating that women who violated the new dress code faced possible flogging.

The mixing of sexes was restricted and gender-based segregation was implemented in some public places, including schools, pools, and beaches.

'Head scarf or a head smack!' Iranian enforcers warn women about their clothing and hair during a crackdown in Tehran in 2012.

The constitution that was ratified in December 1979 mentioned women and their rights in the context of family and Islamic laws.

In 1981, Iran's parliament adopted the so-called Islamic retribution law, which made adultery punishable by stoning.

Women were barred from some fields of study, including engineering and agriculture.

Iranian women protested against the new restrictions, which affected virtually every aspect of their lives.

Abbasgholizadeh experienced the discriminatory laws firsthand when she decided to divorce her husband.

'I had two daughters, and the judge wanted to award custody to their father. It was a shock to me. It was my right to have my kids with me, and from then on the issue of rights became my main issue,' she says.

She and other women -- both the religiously conservative and the secularly inclined -- resolved to fight back.

'We started to examine and study the comments of clerics who would say that, for example, the shah's family law was Western,' Abbasgholizadeh says. 'We started to read about what the Koran really says about women: Should women really obey their husband? Are women really banned from leaving their houses?'

Abbasgholizadeh was subsequently detained three times over her activism and campaigns that included a drive to gather 1 million signatures opposing discriminatory laws and another aimed at banning stoning for convicted adulterers.

Abbasgholizadeh, who has lived in the United States since 2010, now says that the revolution has meant that Iranian 'society has evolved while lacking freedom.'

One of the things that the emergent Iranian leadership did after the revolution was to desecularize education, opening the door for women and girls from religiously conservative families to get an education.

Abbasgholizadeh suggests that one of the effects of that 'Islamization' is an increase in the number of independent-minded women with demands for equality with their male counterparts.

'[Iranian] women's level of awareness, their intelligence, and their political and social growth are far ahead of the Islamic establishment,' Abbasgholizadeh says, adding that women have been actively challenging the Islamic system for four decades.

'They're finding ways to fight back every day,' she says.

Some of those battles have produced results, but such successes remain mostly symbolic or in the margins.

Forty years after the revolution, there are a record number of women in Iran's parliament. And although the Majlis is arguably weak in comparison to many other state institutions -- most of which are firmly in the control of hard-liners, from the supreme leader on down -- some female lawmakers have used the platform to raise women's issues in a way that many conservatives wouldn't.

And despite the crackdowns, Iranian women -- particularly in the capital and other major cities -- have pushed back by donning smaller or brightly colored head scarves, more tightly fitting coats, and even makeup, which was banned in the early years after the revolution.

For more than a year now, the 'Girls of Revolution Street' (and a few men) have conducted sporadic one-person protests against the hijab by removing their head scarves and waving them in crowded public spaces in the capital. Iran's authorities have responded with arrests and jailings. But prominent voices, including the Asr-e Iran news site and Vice President for Women's and Family Issues Massumeh Ebtekar have issued cautiously worded calls for debate on the hijab and other women's issues.

Women are still barred from becoming president, thanks to authorities' reading of an article in the Iranian Constitution that says a president must be elected from among the 'religious and political rejal,' that last word an Arabic term for 'personalities' but interpreted by the clerically dominated Guardians Council as referring exclusively to men. But even that has not stopped dozens of women from applying to run in direct challenges to the establishment.

From French exile, where she publishes works challenging conservative Islamic views on women's roles in society, Chafiq recognizes the obstacles for Iranian women but stresses that 'they've been pushing back, they've been fighting for a presence in all areas' of Iranian society.

'Most of us considered the hijab a secondary matter. Only a minority thought it was an important issue,' Chafiq says of those revolutionary days in Tehran.

'Later, it became clear that they were right,' she adds, 'Women's rights are at the heart of democracy issues.'

Golnaz Esfandiari is a senior correspondent with RFE/RL.