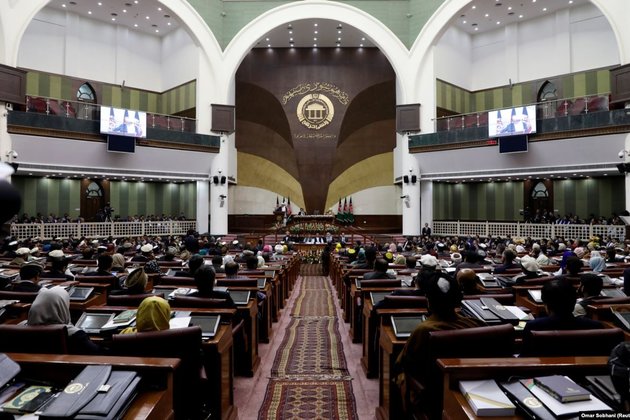 A fight broke out during the first session of Afghanistan's new parliament after disagreement on the election of a speaker.

Online video showed lawmakers fighting on May 19 over the seating of businessman Mir Rahman Rahmani as the speaker of the lower house of parliament, known as the Wolesi Jirga. The body was meeting for the first time since controversial elections held last year.

Rahmani received 123 votes the previous day to defeat challenger Kamal Nasir Osuli, who had 55 votes, for the speaker's post.

But Rahmani was one vote short of the simple majority of 124 votes in the 247-seat Wolesi Jirga that is needed to secure the speakership.

Rahmani's supporters declared him the the new speaker and insisted he take the post.

'He has secured a majority of the votes and one vote is not an issue, so he is our new chairman,' said Nahid Farid, a lawmaker from the western city of Herat.

But opponents of Rahmani -- the father of Ajmal Rahmani, a wealthy businessman known in the Afghan capital for selling bulletproof vehicles to Kabul's elite -- refused to let him sit in the speaker's chair.

'We will never accept the new speaker and there must be a reelection with new candidates,' said Mariam Sama, a parliament deputy from Kabul.

Ramazan Bashardost, a deputy from Kabul, told Tolo News that the controversy over the new speaker could be resolved through legitimate means but lawmakers 'are not willing to address the issue through legal channels.'

The results of the October 20 parliamentary elections were officially finalized this month after months of technical and organizational problems.

Based on reporting by Reuters and Tolo News