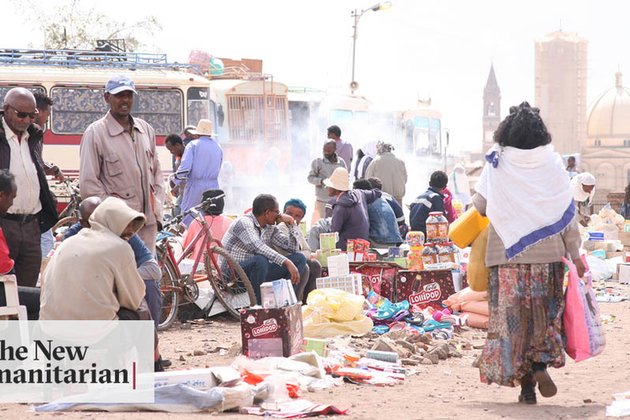 Amid border wrangles, Eritreans wrestle with staying or going

An unexpected rapprochement last year between Ethiopia and Eritrea, and the subsequent opening of the border, seemed to offer hope of a more lenient approach toward freedom of movement by the repressive Eritrean government.

But last week the only open border crossing at Bure-Assab was closed, with neither country offering an explanation. Trade was also suspended. Eritrea's apparent opening up but at the same time very uncertain future are leaving its citizens with hard choices to make.

"I love my country - I have always loved it," says Alem*, 45, who has been living in exile for seven years. "As much as I hate the government, I am still a patriot."

Sitting in a cafe in Antwerp, Alem says Eritreans who leave the country lose part of themselves and often feel like they are betraying the sacrifices made by those who fought for independence.

Eritrea gained independence in 1993 after a 30-year war with Ethiopia. Fighting killed as many as 100,000 from both sides and prompted about a million to leave the country - then roughly a fourth of Eritrea's population. Another war with Ethiopia between 1998 and 2000 perpetuated this diaspora. An estimated one in five of the country's 5.2 million still live abroad.

Even if people wanted to return, it's not easy. Eritrea's strict emigration policy makes it difficult to come back and invest in the country - especially for those who slipped out through secretive routes - contributing to further impoverishment and even more emigration.

State propaganda also portrays migration negatively, and post-conflict tensions with Ethiopia have often muted discussions about it. The topic is polarising in Eritrean society, even among younger Eritreans who have formed the largest demographic of those leaving.

"Migration is a disease here," says a 22-year-old student in Asmara.

Some commentators on Eritrea say punishing those who left in the past 20 years is a wasted opportunity for the large Eritrean diaspora to contribute to the country.

"Before 2001, many diaspora Eritreans from all walks of life and professions did return," says Tanja Müller at the University of Manchester's Global Development Institute. But, she explains, many people's patriotism was strained after they lost money and property during the border war in 1998 - a conflict that led to further deterioration of the country's economy.

While last year's peace agreement with Ethiopia has led to significant improvements in the region's geopolitics, there has been little change in Eritrea's one-party authoritarian system.

That lingering reality, according to analysts and interviews with expat Eritreans, has contributed to many in the diaspora choosing to remain abroad until there are clearer signs of reforms.

Some also choose to reunite with family members in the less risky environment of neighbouring Ethiopia, which hosted approximately 173,000 Eritrean refugees in 2018, according to the UN's refugee agency, UNHCR. That number, however, only reflects registered refugees and may be higher.

"In March, I will meet my family in Addis Ababa for the first time in 10 years," says 28-year-old Goitom*, living in Belgium.

Another Eritrean, Girmay*, was a successful businessman living in the United States at the end of the 1990s. When the 1998 war erupted over the disputed border town of Badme and the surrounding area, he ran to the Eritrean embassy to offer financial support, as did many in the Eritrean diaspora, offering whatever they could afford.

"Our boys were dying to defend the country," Girmay says. "I had to do something."

When the war ended, Girmay decided to return home. The government was offering to sell land for construction to the Eritrean diaspora. Girmay bought a piece of land, built a house, and took his family to live there. He started working for the government with a significantly lower salary than he had been earning in the United States.

He remained optimistic, but Eritrea stayed on the defensive against Ethiopia, with military expenses taking priority over development and investment plans. After years of living without water and electricity, Girmay's patriotism is now being tested.

"So many Eritreans who bought houses like me have lost hope," Girmay says.

While it's easier for older members of the diaspora to return - they departed Eritrea before it was a country or had a watchful government - those who escaped in the last two decades face more risks in returning. Some have made amends by paying their back taxes and by signing an apology letter for their unfulfilled national duties.

Mandatory national service also leaves most youth "serving the nation" in the military or in government ministries for limited salaries. Expatriates who wish to remain connected to Eritrea must pay a two percent tax on income earned abroad to the Eritrean government.

"They can return back any time; there is no problem for them. So many have already come back," says a government representative who spoke on condition of anonymity, adding that the government accepts the reality of migration and understands how difficult it had become for Eritreans to live at home due to the international community making the country increasingly isolated.

In addition to losing its main regional trading partner after the 1998 border war with Ethiopia, in 2006 the United Nations imposed sanctions on Eritrea in an effort to stop the flow of arms and to freeze the regime's assets abroad. But some argue the sanctions had unintended negative consequences for the rest of the economy.

Everyday survival for most Eritreans depends on remittances due to low public salaries and a high cost of living.

"Whoever puts his hands in his pockets is reminded about migration," says Aferom*, a young graduate working for a government bureau in Asmara.

Despite remittances, stories of resentment toward diaspora family members are common.

Some families remain in debt after paying for the journeys of those who left, and many expect more money - not fully understanding the high cost of living outside of Eritrea, especially in Europe or the United States.

"I had to beg neighbours, friends, and various relatives abroad, and afterwards had to bear most of the financial burden," says Solomon*, who gathered 300,000 nakfa (about $6,000 at the time) for one of his brothers to leave, and who lives alone with his parents in a southern village.

The costs of clandestine emigration include payments to smugglers that can range from several hundred dollars to $5,000 per person, depending on the means of transport used, distance travelled, exchange rates, and time of year.

Other Eritreans say migration involves loss of dignity, separation from families, and is a waste of human capital for the country.

"My parents fought for this country; my uncle died for it," says 35-year-old Jeremiah*, who works in a ministerial office in downtown Asmara. "I do not want to leave but to contribute to seeing it grow and develop."

Such loyalties, however, are increasingly tested as each year passes.

"I used to judge my friends who were leaving the country," says Paolos*, the 24-year-old son of fighters from the war for independence.

"Now, I think differently. There is a limit to the sacrifice that we can make for the country. My parents' generation died for this country, while those who have survived live in deprived conditions. The young generations are still... unable to choose for their own lives."