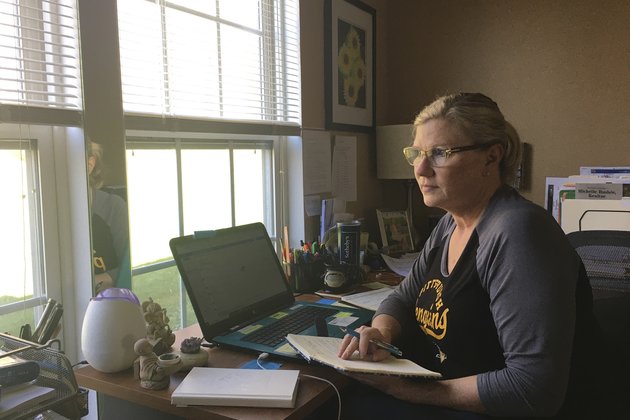 Making Plans, Defiantly, amid the Chaos and Madness

In the "new normal" that is America during the coronavirus pandemic, the act of making plans has taken on a complicated new meaning. People are craving structure amid the uncertainty and chaos, and for some, that means holding on to plans, both short-term and long-term, they had before the virus struck. Or it means making new plans - for a summer wedding or a fall vacation. But how can one make plans when nobody knows how long the current situation will last?

As owners of a wedding and event-planning business, Karina Lopez and Curtis Rogers have always known how the best-laid plans can go awry. But there's no way they could have imagined just a few weeks ago what would happen to their very own wedding plans.

First, the joyous bash they'd been meticulously planning for many months - a three-day celebration for 200 guests - was thrown into indefinite limbo. Then they both tested positive for coronavirus.

Yet now, as they recover in quarantine and try to keep their distance from each other in a one-bedroom New York City apartment, Lopez and Rogers are still making wedding plans - methodically and, indeed, defiantly. After all, they're planners. It's what keeps them going.

"I definitely had one or two meltdowns," says Lopez, 32, who is still experiencing symptoms but feels she's on the mend. "Which I look back and realize is so silly, considering what people are going through." But now, she says, wedding planning has become therapy: "It went from making me insane, to keeping me sane."

Making plans. In normal times, it's a process we don't really think about. But during this pandemic, the process of planning - be it a short-term grocery list or organizing an entire summer wedding - has taken on an entirely different meaning, serving for some as a life preserver amid all the fear and uncertainty.

It depends on the personality. Some people thrive by living in the moment. But others really need their plans.

"For many, having schedules and structure and timelines and things they can count on is important. Knowing they can count on something happening gives them security, some stability, some purpose," says Helen Park, a family therapist, social worker and specialist in mindfulness.

In current conditions, Park notes, even non-planner types are seeking ways to organize their lives. If you're hunkered down at home, suddenly Friday doesn't seem like Friday because the weekend hardly feels different. Monday morning carries little of that back-to-the trenches feeling, even if a Zoom call is waiting at the kitchen table.

On social media, jokes abound about this unsettling sense of timelessness.

"What year is it this week?" asks one meme. "It's the 87th of March," goes another. Or: "Today is Blursday the fortyteenth of Maprilay."

As Park conducts therapy sessions to help families eke out a quasi-normal existence, she finds them unmoored "because it's not just day-to-day life that has been upended," she says. "The nature of what we're dealing with is so new and unknown. Is it two weeks like this, two months, until the summer, or after? If we knew, we could start to internally organize our lives. But the sands are shifting constantly."

For some families, especially those in apartments with younger children, it's about trying to get through the day intact. In another family, where a high school senior is looking ahead to college in the fall, the mother is reluctant to accept that it may not happen as planned.

"She just needs to keep planning and counting on it," says Park. "It gives her hope and something to stay grounded in."

Lopez and Rogers refuse to accept they won't be getting married on August 1. A few days ago, they agreed their wedding would proceed, whether as the extravaganza they'd planned or, if necessary, a marriage via Zoom, Lopez says, "with our immediate families and our officiant in our living room."

"As silly as it sounds, this gave me hope," she says of the decision. The couple recently wrote a blog post promising friends their invitations soon - and untouched.

Kasey Woods cannot give her son his senior prom via Zoom, much as she'd like to. Woods, a New York mother of three who works in public relations, alternates her anxiety about the pandemic with feelings of pride for her oldest son, who's been accepted for the fall to his mother's own alma mater, Howard University.

She was hoping that attending admitted students day would seal the deal for him, since he's choosing between several schools. That, of course, was canceled, along with prom and a surprise 18th birthday party she'd been planning.

And yet Woods keeps planning, too, whatever she can. "One of my ways of regulating my life and my mental health is that I have to write everything down," she says. "My notebook and my calendars are my lifeline."

Michelle Bushee, a real estate broker in Pittsburgh, has always been an avid planner. And she's old-school: Bushee eschews digital planners for the paper kind - not little black books, but those big spiral volumes with expansive pages that she normally fills up with meetings, house showings, closings and volunteer activities.

"My weeks used to look really scary," she says, meaning scary busy. Now her planner instills a different kind of fear: The entire month of April is empty - big white pages of miserable nothingness. "Now THIS," she says, "scares me."

A couple weeks ago, Bushee had what she admits was "a really bad mental health week, I'll be honest. I think it was the shock and the anger of the situation. I kind of got off track."

She decided to double down on her morning routine. For years, this has included rituals like journaling, writing down three things she's grateful for and deciding what will be the "win" of the day.

"Just something so that at the end of the day, regardless of how crappy it was, there's something that was a win - even taking the dog for a walk," she says. Most helpful, though, is when she's able to do something for others - for example, a recent initiative to deliver 500 catered meals to a hospital emergency room for health care workers.

"I find that my purpose is somewhat displaced right now, and I'm trying to find another purpose,' she says. "So part of my planning has become, 'Who can I help today?'"

A big music fan, she's also holding onto the list of concerts she bought tickets for this spring and summer: the Rolling Stones, the Doobie Brothers, Dave Matthews. Some have been canceled; others surely will be. But she keeps the list.

Park, the family therapist, appreciates that people need their plans. She worries, though, that trying to hold onto a rigid structure that no longer makes sense may produce anxiety in itself. "You can be putting in a lot of energy to fight to keep that structure in place," she says.

If a day is particularly bad - and Bushee says she's had plenty - she finds she can at least draw comfort from a very simple bit of prescribed structure that's really a built-in piece of planning in miniature: a recipe. Cooking at home has become not only a necessity, but a release.

"I made chicken pot pie for my family the other day," she says. "including homemade crust, which I never do. You know what? It was pretty awesome."